This page is now updated on the CD we offer.

This content is not available anywhere else but on the CD.
You may ask, "Why is it here then?"
Thank you for asking. We have a reason, and it is far more
interesting than the price of the CD. Ah, but it is a deep dark secret :-)
Buy the CD, and you will probably figure out some deeper issues.

You may also want to visit our new version of this journal at:

The new manifestation of our zeal is this:

ONLINE:
Much Assurance, Blessed Quietness, and Rebuke of Pharisee Christians

ON THE CD FOR SALE:
600 Mgb, 8100 files, of information, most of which is available nowhere else.
All of the controversy originally found here, Balaam's Ass Speaks
But, updated and maintained on a daily basis, including new articles. 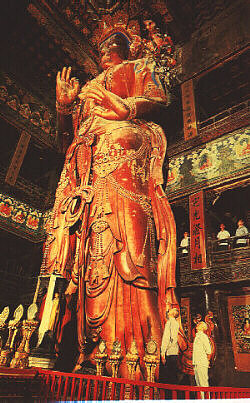 MAITREYA, OR THE ANTICHRIST?

UPDATE-- Benjamin Creme has tried to predict the Maitraya's arrival again.
He mis-fired last time.
Is this the one that will succeed?
Has Creme and some clandestine group arranged the supreme hoax?
Or is this Antichrist?

The Maitraya--
Can be seen at Ten ThoBlipnd Happiness Pavillion in Beijing, China--
Photo from Chinese tour book.

British futurist says 'World Teacher' will be seen on TV within five weeks.

At his first American press conference in 15 years, British futurist Benjamin Creme stated that Maitreya - World Teacher for the coming age-will be interviewed on a major American network before the end of the year. This will be followed by appearances on other networks around the world and, within months, will lead to a global satellite hook-up where Maitreya can speak to all people simultaneously-in their own language.  Maitreya, according to Creme, is the great spiritual teacher expected by people of all religions, although they know him by different names: Christ, Messiah, Krishna, Imam Mahdi, Maitreya Buddha and others.

In 1982 Creme challenged the world's media to cover this story as it was then just beginning to unfold. Although major media largely ignored Creme's challenge, citing lack of tangible evidence, small groups of journalists pursued the story over the years, making it possible for Maitreya to exert a growing influence in world affairs.

Creme says that now, fifteen years later, evidence of Maitreya's presence is abundant and points to:  Release by Maitreya of amazingly accurate forecasts of world events, demonstrating his extraordinary insight and understanding of the Law of Cause and Effect.  Dramatic, unexpected and benevolent world changes, such as the fall of communism in the Soviet Union, the end of apartheid in South Africa, peace initiatives in the Middle East and Northern Ireland, and the growing power of the 'people's voice'.

Maitreya's 'out of the blue' appearances to religious groups throughout the world, many of whom recognize him immediately as their long-awaited teacher.  A continuous wave of miraculous phenomena including crosses of light, manifestations of Jesus and Mary in the clouds, weeping statues of the Madonna, milk-drinking Hindu icons, wells of healing water in Mexico, Germany and elsewhere, and other super-normal events.

Hundreds of letters sent to Share International magazine, of which Creme is Chief Editor, documenting personal experiences of Maitreya.  Maitreya's upcoming interview, says Creme, will be an opportunity to present his priorities. His chief concern is the divisions in the world that allow 35,000 people a day to die from starvation and one-fifth of the world's population to live in absolute poverty. His next priority is to restore ecological balance and sustainable use of the Earth's resources.

By creating apiano coverseness of what is actually taking place in the world, by awakening human compassion, and by galvanizing us into action, Maitreya, says Creme, will help us completely transform the world over the next 15-20 years. One example of what we can expect, Creme predicts, is a new science-the Technology of Light-which will provide all the power needed on Earth and make possible the regeneration of human organs.

Creme described the extraordinary heart-felt response of people everywhere to Princess Diana as a prelude to the experience on Maitreya's 'Day of Declaration'. "Every individual will feel as if he has embraced them personally," says Creme. "A new livingness will begin from that moment."

Note: The exact timing of this interview will be arranged, at the appropriate moment, between Maitreya and the program's producers.  The identity of the network may not be revealed ahead of time.  We do not expect that Maitreya will be introduced under that name, or as 'the Christ', 'the Messiah', etc.

Things didn't work out again for Creme and Maitraya.  It seems we are not ready yet to receive the revelation.  Perhaps we have not given Creme enough pension money to sustain him in the years after the limelight turns from Creme to Maitraya.  Or, maybe Creme simply calculated wrong.  Prophets these days are doing a lot of that.  Creme, I am told, is peddling hard to explain why the Maitraya couldn't keep his appointment.  Stay tuned for the next try.

The rest of this page is the first in a Satanic "treasure hunt."  You will have to read one page in order to progress to the next.  This is the only time I have done this in the whole journal because you MUST learn the first information to understand the last.  The first bridge from formal religion to the Maitreya has been built by the Charismatic movement.  I shall prove this.  Hear me out.  If you are in the Charismatic movement, you will be forced to leave or choose Satan at the end of this discussion.  Don't say I didn't piano coversn you.

If you sense that this is highly significant in the end of the Age of Grace, then you will read every word in the whole progression I am giving you.  I am very motivated to learn of other appearances and any world or religious figures who have in any way spoken to or approved of this Maitreya.

STEP ONE IN THE SATANIC "TREASURE HUNT"

He has been expected for generations by all of the major religions. Christians know Him as the Christ, and expect His imminent return. blips await Him as the Messiah; Hindus look for the coming of Krishna; Buddhists expect Him as Maitreya Buddha; and Muslims anticipate the Imam Mahdi or Messiah.

The names may be different, but many believe they all refer to the same individual: the World Teacher, whose name is Maitreya (My-'tray-ah).

Preferring to be known simply as the Teacher, Maitreya has not come as a religious leader, or to found a new religion, but as a teacher and guide for people of every religion and those of no religion.

He will launch a call to action to save the millions of people who starve to death every year in a world of plenty. Among Maitreya's recommendations will be a shift in social priorities so that adequate food, housing, clothing, education, and medical care become universal rights.

Under Maitreya's inspiration, humanity itself will make the required changes and create a saner and more just world for all.

In recent years, information about Maitreya's emergence has come primarily from Benjamin Creme, a British artist and author who has been speaking and writing about this event since 1974.

According to Creme, Maitreya descended in July 1977 from His ancient retreat in the Himalayas and took up residence in the Indian-Pakistani community of London. He has been living and working there, seemingly as an ordinary man, His true status known to relatively few. He has been emerging gradually into full public view so as not to infringe humanity's free will.

As a modern man concerned with today's problems, Maitreya has worked on many levels since 1977 to prepare humanity for His outpiano coversd presence.

From behind the scenes, the outpouring of His extraordinary energy has been the stimulus for dramatic changes on many fronts, including the fall of communism in the Soviet Union, the collapse of apartheid in South Africa, the rapprochement between East and West, the growing power of the people's voice, and a worldwide focus on preserving the environment.

Outpiano coversdly, He has met with groups of journalists and influential leaders from all fields, informing them of His solutions to today's most pressing problems and of the role they might play in the coming time.

Since 1988 Maitreya has appeared miraculously throughout the world, mainly to orthodox religious groups, presenting in the simplest terms the great spiritual laws governing our lives. And, through steadily increasing signs and spiritual manifestations, now widely reported in the media, He has touched the hearts of millions, preparing them for His imminent appearance.

At the earliest possible moment, Maitreya will demonstrate His true identity. On the Day of Declaration, the international television networks will be linked together, and Maitreya will be invited to speak to the world.

We will see His face on television, but each of us will hear His words telepathically in our own language as Maitreya simultaneously impresses the minds of all humanity. Even those who are not watching Him on television will have this experience.

At the same time, hundreds of thoBlipnds of spontaneous healings will take place throughout the world. In this way we will know that this man is truly the World Teacher for all humanity.

What is a Master of the Wisdom?

The Masters of the Wisdom are a group of perfected individuals who have lived behind the scenes in the mountains and deserts of the world for countless millennia, guiding and overseeing humanity's evolution. They are  now in the process of emerging into the outpiano coversd everyday world for the first time in many thoBlipnds of years.

At their head is Maitreya, the Master of all the Masters, who is now living among us.

Masters of Wisdom -- Individuals who have taken the 5th initiation, having passed through all the experiences that life in this world offers and, in the process, having acquired total mastery over themselves and the laws of nature. Custodians of the Plan of Evolution and all the energies entering this planet which bring about the fulfillment of the Plan.

Initiation -- A voluntary process whereby successive and graded stages of unification and at-one-ment take place between the man or woman in incarnation, his/her soul, and the divine Monad or spark of God. Each stage confers on the initiate a deeper understanding of the meaning and purpose of God's Plan, a fuller apiano coverseness of his/her part in that Plan, and an increasing ability to work consciously and intelligently topiano coversds its fulfillment. [ Balaam's Ass Speaks-- Born again believers know this "initiation" is demon possession. ]

Maitreya as He appeared in Nairobi, Kenya

The Teachings of Maitreya and Krishnamurti -- A Comparison

background information on this subject.

Find these topics  from the Maitreya's page at:  http://www.shareintl.org/maitreya.html

Books by the Tibetan (Djwhal Khul), through Alice A. Bailey

Meditations for the New Age

Is this finally the Antichrist?  To say a flat "NO" would be folly, but we are not given instruction in the Word to make a big thing of this.  I believe the saints may very well discern who he is just before the Rapture of the Church.  If that bothers you, don't panic.  It isn't really very important compared to watching for the Lord Jesus to return.

HERE IS THE REPORT OF BROTHER EASTWOOD ON THE NOVEMBER 18, 1997 LECTURE IN ALTLANT, GA BY BENJAMIN CREME:  http://home.sprynet.com/sprynet/eastwood01/hotlanta.htm

BACK TO NEW WORLD ORDER

BACK TO THE TITLE PAGE