During the 1950s a number of companies made pianos using plastic parts. It seemed like a great idea, but they had no way of knowing what would happen to those parts over time. Soy bean plastic from the 1950s crystallized in about 10 to 30 years. Some parts lasted longer for some reason, and tuners are still replacing them.  The most commonly used plastic item was the elbows at the bottom end of drop action wires (see diagram pages). However; many other action parts were plastic. A little later in this chapter you see a section on Vagias elbow repair.

If you have found that your piano has plastic action parts,
here are the considerations in descending order: 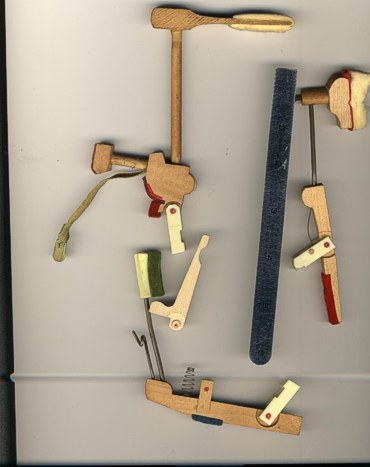 FIRST, is your piano worth saving? If it is a spinet and a low value brand, you should ask the tuner to make the repairs that will let you squeak through for a while, and start shopping for another used piano. If the piano is a Jesse French or some other higher quality piano, then the value of a working piano is far higher than the cost of parts, especially if you do the repair yourself.

SECOND, If your only plastic parts are elbows in a spinet, order the Vagias elbows from your tuner or my Online Catalogue at the end of the book, and replace them yourself. It is not that difficult, and it IS worth it.

THIRD, If your piano's action is full of plastic parts, but you want to keep it, you should plan on a lot of labor time and parts costs which are a bit high. It could cost you from $300 to $500 for parts. To have the parts replaced as they break will cost you far more over the coming years, and you will have the use of it interrupted frequently.  Do all of the replacements at once-- save money. If parts other than the drop action elbows are made of crumbling plastic, you should send e-mail to learn more about the prospects of your piano and the labot involved. 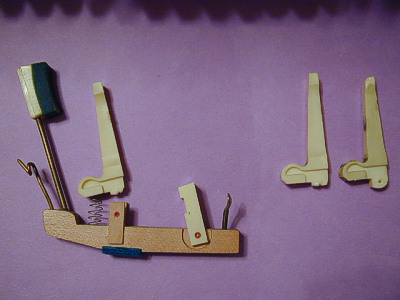 On the right you see back check, butt and wippen flange, and damper flange are plastic-- From a Jesse French piano.

On the left is a classic example of a spinet piano wippen with plastic flange, back check, and jack. This one should have a whole new wippen, not piece meal.

This Lester had plastic flanges.
It is usually more practical to replace the whole wippen rather
than just replace the flanges.