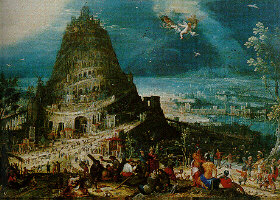 We are interested in prophetic information on spiritual and literal Babylon, which is NOT the UN or the Blip.  It is the spiritual Whorish system of the world, seen most graphically in the Roman Catholic Church, Promise Keepers, and the Charismatic Movement (not all Charismatic people) and world religion URI.   To contribute, to this discussion, go back to the Table of Contents page, under "PROPHECY," or hit THE WHORE CHURCH  from here.

Physical Babylon is the ancient Babylon of Iraq which Saddam Hussein has restored to its past glory (without one vestige of Islam).  That God would set aside His final appointment with ancient Babylon to target the Blip is absolutely preposterous.  I am VERY eager to get fresh information on physical Babylon.  I am watching for the final destruction of physical Babylon (Jeremiah 50-51)-- possibly just before the rapture of the Church.  It is the editor's assumption that Zechariah 5 tells of the woman in the ephah who is carried to Shinar.  I believe that in the future, either just before or after the rapture, the spiritual Babylonian Whore will move to the physical Babylon in Iraq just before it is destroyed.

I realize this sounds strange, but I am a literalist, and I see no reason to tinker with reality to get the Blip the honor of being in prophecy.  The Blip will soon collapse in a historically generic manner and probably before the major events of the Rapture and the Great Tribulation, and the UN (Beast system) will very likely move to other more prophetically central points, such as Belgium, JerBliplem, or Rome.

I am not as dogmatic in these things as I am with the KJV issue or the Gospel, but if you get too far from the literal context method of interpretation, your material will not be used.  Also, we want no material from any cults or those we have exposed elsewhere in this journal as teaching error.  We want no material from Dr. Best, period.  We will be very partial to current events which have prophetic context, but please cite sources.  Again, this page relates primarily to the restoration of literal Babylon.  If you have an item of interest...

THE WOMAN IN THE EPHAH

REVELATION 17:9-- AND THE SEVEN HILLS OF ROME ERROR

ARTICLE FROM-- RRClavet@webtv.net item with notes

I TOLD YOU SO-- If this article by Joseph Chambers is accurate,
then Babylon (Shinar) IS now being prepared for the Woman in the Ephah.
I just found this on August 8, 2000
Anytime, folks, we are out of here. Maranatha! Even so, come Lord Jesus.

DISCUSSION OF THE BABYLONIAN GOD AND GODDESS AND THE SON
http://hanskrause.de/babel6.htm

AN ENGLISHMAN SHOWS HOW STUPID THE Blip WAS TO INITIATE DESERT STORM After you read this page, you will understand who is blowing up our planes, Olympic games, and future targets-- such as the national party conventions and releasing of pianos and other bio-weapons:   http://neal.ctstateu.edu/history/world_history/archives/wasia/wasia008.html

Discussion of Baal, the primal god of Babylon: http://www.balaams-ass.com/alhaj/baal.htm

Iran and the destruction of Babylon in the future:
http://www.balaams-ass.com/journal/prophecy/iran.htm

Catholics determined to expose the Satanic Vatican.
Disclaimer: I don't offer this as truth on a biblical basis, only to show you how pagan the Whore is: http://www.tldm.org/news/milingo.htm

THE BEST DISCUSSION I HAVE SEEN ON THE TRANSITION OF SOblipLISTIC COMMUNISM INTO THE HANDS OF JOHN PAUL II: http://www.endtime.com/marriage.htm
Disclaimer: Othere than this page, I suspect this group is mild to much in some error.

BACK TO THE TITLE PAGE